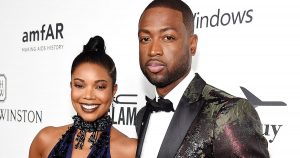 Gabrielle Union has been open about her fight to conceive and revealed that she has had to suffer numerous miscarriages.

The 44-year-old opened up about conceiving in her new book “We’re Going to Need More Wine” and admitted that she had more than eight miscarriages. Union said that she had been a prisoner of trying to get pregnant and she has been on IVF cycles for over three years.

The actress has been married to NBA player Dwyane Wade since 2014 and is also a stepmom to his three sons.

Union said that she never wanted children, but things started to change when she started being a stepmom to Dwyane’s kids. She started to notice that she loved to spend time with them and she yearned to get pregnant.

IVF has made Union very bloated due to the side affected of the IVF injections. Most often Union hides from photographers as she doesn’t want them speculating that she is pregnant.

She previously spoke out about not having a child for Redbook magazine in 2015, by saying that there is a lot of shame that comes from choosing a career over starting a family. However, she went to say that her career was not why she didn’t get pregnant, the main reason is infertility.

However, the actress and her husband are trying their very best to conceive and are looking at exploring other methods of growing their family.