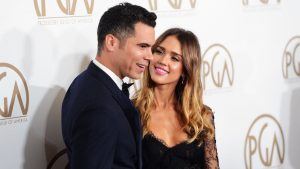 The actress and The Honest Company co-founder Jessica Alba has just welcomed her third child with her husband, Cash Warren.

The couple has named their baby boy Hayes Alba Warren and said on social media that they feel blessed to now be a family of five.

The couple are the proud parents of their daughters Honor and Haven, who have been waiting to meet their new brother.

Alba announced in July that they were expecting their third child by posing with her daughters back in July, on social media. In an Instagram post, the actress posed with her daughters for a boomerang while holding a giant number three balloon.

Alba recently enjoyed her baby shower with her closest friends including Rachel Zoe and Molly Sims at Ladurée in Beverly Hills. The tea party was a success as the actress announced that she felt so loved and happy.

The actress said that although she worked during her pregnancy, she will be taking some time off to enjoy her newborn baby boy.