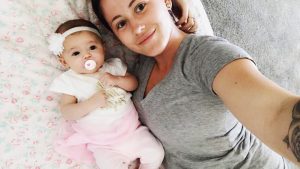 The Teen Mom 2 star Jenelle Evan’s opened up about her father, Robert Evans.

Evan’s who is known as an open book to her fans will be realeasing her memoir that is said to include stories that talk about an emotional past.

She spoke about her relationship with her father, by saying that for a short time Robert Evan’s (her father) was in her life, she was daddy’s little girl. She went on to say that she has always loved and admired her father but without warning her father left her and cut all ties.

She continued by saying that the relationship with her father is still nonexistent and she hopes that someday this will change and they will be closer.

Evan’s recalls that her parents often argued and the main reason was that her father did not put his family first and that her mom felt neglected. She also remembers that the atmosphere at home was often tense as she didn’t know what argument was going to erupt and who was in a good mood or not.

Although she was very young, Evan’s believes that this instability has impacted her life. She too has had many troubled relationships and has often wondered if she had a strong father in her life, she may have made better choices.

The star said the memories of that time are not crystal clear as she was young, but she wishes she paid more attention so that she could have realized the same signs in her own life.